The counter-culture has always created new and unusual fashions that wider society eventually embraced- until another rule breaking trend came along. These fashions are ruled by two signs- Pisces and Neptune. Today I want to talk about how they paved the way in fashion and how each reflects ideas associated with them in Astrology.

Everything changed in the 1960’s, ruled by Pisces, this influential decade saw the rise of youth movements calling for revolution. It called for society to move away from the material into the spiritual. This Neptunian decade saw the rise of the New-age movement, the sexual revolution and Civil-right movement. All these very Pisces endeavors were followed by some great fashion trends that reflect the era. The Pisces aesthetic is ruled by the planet Neptune, similarly ,it is hard to pin down. The Pisces look is slightly everything- and just when you think you know what it’s about- it becomes something else. Pisces is the chameleon of the zodiac; as such people who embody the Pisces look are capable of creating an illusion. The illusion is usually beautiful and it reflects something that is in fashion in society. 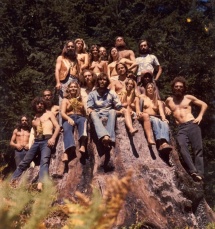 The style is not individualistic but collective- it reflects current trends and desires.The 60’s collective was interested in major Pisces themes. Pisces rules both Neptune/Jupiter and the 12th house. It is interested in social justice and spiritual growth. The fashion was a tool- a statement for these new ideas and religious and political movements. The biggest changes in style happened around the mid-decade and they reflect what Pisces does best:  it dreams of something else- the other world, the invisible, the spiritual. Dreaming of something bigger and better- beyond the material world, the fashion is both anti- material and pro- nature while still being very edgy and political.

It is a style that wants you to use your imagination while at the same time it is not interested in the material- sounds confusing? That is because it is. The Pisces fashion is the kind that holds an “I don’t care” attitude while still wanting to make an impression of all the fantasies, dreams and ideals behind it.  One decade in particular, comes to mind- the Pisces decade of the 60’s. When free love ruled and ideals challenged and created. The fashion was all about not conforming- breaking the rules of society, but it was also about everyone doing it- a collective kind of style.

People were connecting with nature by wearing  less clothes or some peasant inspired clothes in colorful fabrics, usually with natural patterns such as flowers and leaves. Clothes inspired by tribal/oriental and Native American styles also became very popular.The sensory joy of Pisces comes from light colors of blue and green as well as shiny fabrics and jewelry.  The fashion isn’t overtly sexual but it does get your attention with how original or bright it is.

The Hippie style of the 6o’s paved the way to what we have today: the option to wear what we want. Never before was it possible for people to look different from each other and have their original style of choice, no more man walking around with the same haircut and shave, tie and hat. No more women in red lipstick and long skirts. Being different becomes that would pave the way for new styles that prized people who used their dress as a political statement.

Remember when this was a big deal? The Beatles got a lot of attention for their haircuts not just their music. 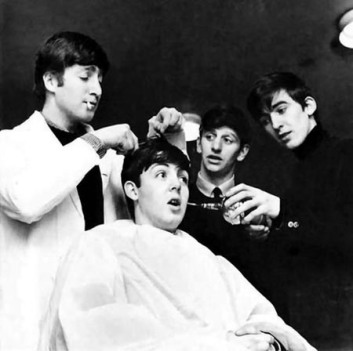 Wearing hair long has many connotations in society-  words like free, wild,crazy all come to mind. Hair is the only part of the body that is in fact, well…dead. We can do whatever we want with it- cut it, dye it, shave it. It is through hair we can express ourselves. Hair is also something we control- by washing and styling it we metaphorically control death. Wild and long hair that becomes closer to its natural state is an act of connection to our animal nature perhaps that is why it is not approved by society. Places like work and school all call for a particular hair- tamed, brushed and controlled hair.

The hippie hair was anything but controlled and it explored boundaries while making a statement. Gradually it paved the way to “rebellious” hair of the next generations.

Punk styles are a good example of Pisces moving into Aqaurius the rebel- but it wouldnt be possibal without the decade before.

As the decade moved into the age of Aquarius (the exact time of calculation isn’t important, I believe  it was a gradual shift from neptune to Uranus) the new-age did not bye as easly into peace and love mentality. The matirial isn’t rebelled against, instead it is believed thehigher spirtual can be achieved through new inventions. This new world has a new counter-culture: edgier,draker and more concerned with the new.  The Pisces age was still intrested in the past- deriving its style from the tribal and old world, back when it imagined people were more connected to nature. The new age on the other hand, believs in the future- computers, Iphones, space travele.

Neptunian fashions were all about connecting to the ideal- be it political or spiritual. The styles broke the roles but still held a somewhat soft look: soft colors, natural fabrics and an elment of optemism. The 60’s were hopeful for a better future, as the decades moved along and a reality of peace and love didn’t happen- the fashion became harder, edgier and darker. People wanted to embrace whatever newest trend, but of course all new trends build on the past. The 80’s saw he rise of the new Romantic fashion, in contrast to the mainsteram it emphaised the fantastic,imagenery but also let socities devil’s out- the dark side of concoummer culture, dissapointed by the lose of ideals but also ever growing into the future with it’s new technologies. People worked hard and wore shoulder pads, and did aerobics.

Counter-culture was about punk, metal and goth,and thier wonderfule fashion. Like Uranus, the clothes are strange and perhaps over-the top and  wonderfully rebelioues.

The 1980’s fashion was dervied from clup-fashion and the crazy outafits people wore going out. Like the new romantics who  brought the strange out into the open- and they made it look good. Unilke the punk’s they wanted to create glamour, using a genreous mix of big fabrics makeup,

and inspiration from Hollywood movies, they dressed like queens and pirates. Music was also a huge influence- electronic, robotic Uranus ruled music made sure that people dressed up in wonderful costumes that could be noticed even  in the darkness of the club- but there was really now need to dance  to this kind of  music, moving like a robot was fine. The outfits were outrageous and yet influenced mainstream fashion with their dramatic flair. The new romantics also had a darker side, they liked to experiment and go over the top with seeking new adventures, this did not only include new music but also drugs. Along with the new-Romantic fashion came Goth fashion, emerging from the 70’s Punk scene. The clothes like the music became darker but like other trends of the 80’s they were also androgynous. 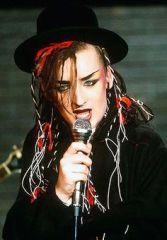 Goth fashion allows man to wear feminine kind of clothes and even makeup- this gender bending is what Uranus likes best- to be free of a label and to become an “other” something like an alien creature. This is both a rebellion against established norms but also an experiment- and Uranus love to experiment. The freedom within being the “other” allows room for genius and creativity. Indeed the 80’s may not be remembered as such but they, from science to art it held an amazing amount of creativity and inventiveness.

The 90’s actually saw a bit of a rivival of our Hippie fashion and another wave of optmeism in the future. I don’t have naything praticularly Urenian to add about it- it is all quite electric.

The fashion of Tommorw

Today, we are still very much into reviving 80’s and 90’s fashions but with a clean-cut minimalist twist- that makes it more futuristic. Fashion today is all about free choice and your expressing individuality. Still some trends worth mentioning:

The early 2000’s inspired by 80’s scene saw the rise of Emo fashion, whatever that was, seems to be pretty much like a mix of punk/goth and New Romantic. The last years have seen the rise of a somewhat new creature, the Hipster. Concerned with globalization turning the world into one small boring Island- that needs saving. The Hipster makes sure to be keep individuality alive. What is interesting here is that the Hipster is a product of a new generation, often called generation Y. This generation has the internet- the ultimate Aquarian invention “Bringing people together” with Facebook and YouTube. These folks can and do hide under many names but the gist of what makes them rebels is still undecided. In fact I think the Hipster deserves a post of its own as a product of the New- Age, or something.